Chamber of Mysteries and the Magical Wonder Show 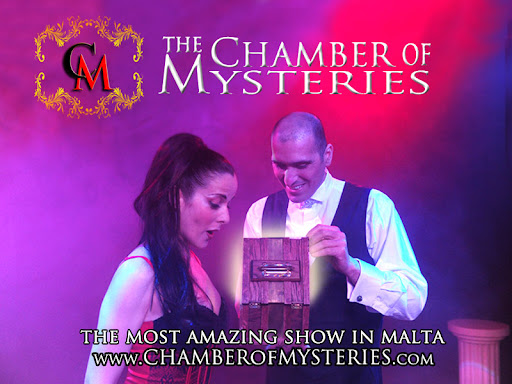 Comeback of the award-winning show The Chamber of Mysteries and a brand new show, The Magical Wonder Show It's been a long time since we last posted as there wasn't much major news to share until now! However, now is the time to break this great news and tell you about two shows Brian Role and Lola Palmer are going forth with this August! One brand new show, The Magical Wonder Show, and the restart of the award-winning show Chamber of Mysteries. Both shows are exclusives and set in different venues. Both are ideal for all the family but one is specially for children. <h2><strong>Chamber of Mysteries </strong></h2> We are happy to announce that Brian Role and Lola Palmer will be back with the award-winning show, The Chamber of Mysteries starting again Friday 6th August 2021. The show now features some new acts catered specially for the current situation. Availability is very limited due to the current Covid-19 restrictions in place and therefore tickets
Post a Comment
Read more 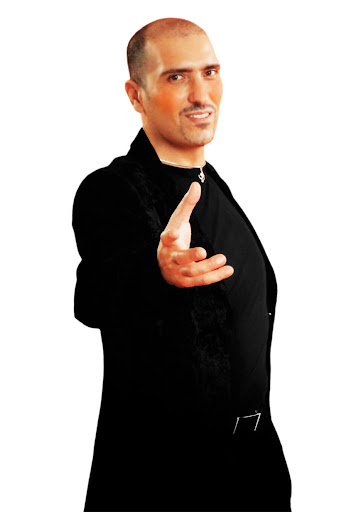 Member of the International Assembly 272 of The Society of American Magicians since 2020 - Brian Role Profile [caption id="attachment_16125" align="aligncenter" width="397"] Magician Malta - Brian Role[/caption] Brian Rolè is a full time professional magician and illusionist from Malta. He performs across the world in theatres, hotels and at sea with his partner Lola Palmer. In Malta, Brian and Lola operate and perform on a weekly basis in their very own dinner theatre show, The Chamber of Mysteries . Being the only show of its kind in Malta, it is set in its own unique theater of magic. It is also the longest running weekly theatrical show of any kind in Malta, since it's first performance in 2011. He often gives solo performances during private and corporate events, at various entertainment venues and sometimes on television. Brian Role` is a full member of The Magic Circle, the International Brotherhood of Magicians and the Malta Magician's So
Post a Comment
Read more 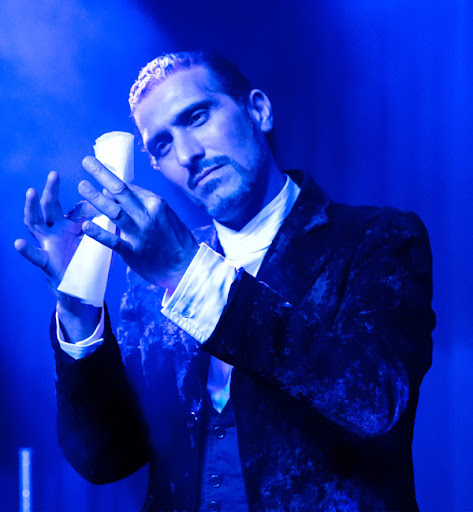 Brian Role`, member of the Magicians' Society Malta I.B.M. Ring 202 since 1996 Brian Role` became a full member in 1997. Three years after Brian took on a professional career performing magic in several countries from South America to Asia in theatres, hotels, theme parks and on cruise ships together with his partner Lola Palmer. Since 2011, he's been performing in Malta's longest running weekly theatrical magical show, ' The Chamber of Mysteries ', for which, in 2017 was awarded the prestigious I.M.S. Merlin Award . Brian's engaging close up magic, stage illusions, parlour magic and mentalism shows have led him to a busy life of performing professionally for public events, private parties, weddings and corporate events. He has appeared on several popular television programmes as a guest or as the regular resident magician. Brian Role` is also a member of The International Brotherhood of Magicians, The Magic Circle, the Society of American Magicians and the Inte
Post a Comment
Read more

The upcoming Gala Show of the Society of American Magicians , International Assembly #272 is on this Sunday 13th December 2020. Brian is happy to be forming part of a wonderful international cast. The remarkable World Class Cast of magicians include: Kevin James USA - Tony Junior UK - Bill Palmer USA - Tim Wise USA - Scott Wells USA - Paul Abbey UK - Elmo Huovila Finland and Brian Role` Malta . The show will be hosted by the President of the International Assembly #272,  Mr Anthony Darkstone . The show will be broadcast live via zoom on the 13th December 2020 4pm Eastern USA - 9pm UK - 10pm Malta The International Assembly Gala Show is open for all to join without any cost, so feel free to join and share this unforgettable experience of world class magic in your home. Use the link and information below to join: https://us02web.zoom.us/j/89837121286... Meeting ID: 898 3712 1286 Passcode: 467534 Executive Producer is none other than Dr Joel Zaritsky, S.A.M. President Brian is
Post a Comment
Read more

By Rolemagic - October 04, 2020
Hadd Ghalik TV Game Show 2020/2021 Today kicks off the new season of Hadd Ghalik , a popular TV Game show featuring two teams off an opposing nature, playing vs each other. Past programs featured teams such as Tall People vs Short People, Sporty People vs Non Sporty People and many other opposing personalities. Hadd Ghalik is hosted by Angie Laus, together with game master PJ Mintoff and Mario Coleiro. The first program of the new season kicks off with Magicians vs Street Performers.  Brian is obviously on Team Magicians. The games are expected to be silly but fun. Expect a lot of entertainment from juggling, stilt walkers, belly dancers to of course lots of magic. The program is usually streamed live at 12:15pm (local Malta time) on TVM.com.mt Watch out for Brian Role` who will be appearing on other TV programs and stations during the upcoming seasons.   #magicianmalta #brianrole #haddghalik #magicontv #malta #television #tvm Check out www.magicianmalta.com.mt
Post a Comment
Read more

Magic at the Hybrid Festival in Valletta 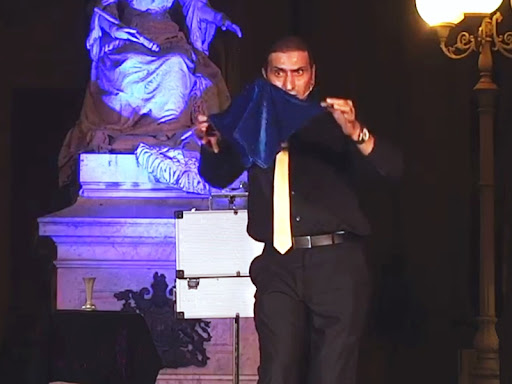 Brian Does Magic at the Hybrid Festival Brian's first public stage magic show post Malta's partial but significant lockdown was held on the 2nd of September 2020. This day will remain a memorable one for Brian due to the strange circumstances. The weather was perfect for a night of non stop magic for all those people wondering the streets of Valletta. More people eating or having a drink at the restaurants in the piazza also got to enjoy the show. WATCH VIDEO FURTHER BELOW The show, 'The Magical City' was produced by Ring 202 who put it together as part of the Hybrid Festival. Festivals Malta , who are the organisers of the festival, are running it through out various spots around  Valletta. The Hybrid Festival is an ongoing event, running until September. A truly magician night in the heart of Valletta with the stage set in front of the iconic monument of Queen Victoria in Pjazza Regina in Valletta.  An additional  backdrop of the magnificent building of the national l
Post a Comment
Read more

Brian Role` is now proud to be a member of S.A.M. (Society of American Magicians).  S.A.M. is the Oldest Magic Society in the World with Past Presidents such as Harry Houdini. Current members include Lance Burton, Max Maven, Mac King & David Copperfield. It is a prestigious society for those with a genuine interest in the art of magic.  S.A.M. is proud to include Brian amongst its members of expert historians, collectors and professional performers. Despite the name implying the society is for American magicians, S.A.M. includes members from all over the world.  Brian now joins other celebrity magicians in the 272 S.A.M International Assembly. Members of the assembly include names such as Ariann Black, Scott Wells and Michael Finney amongst others. The president of the assembly, Anthony Darkstone, welcomes Brian as an asset to both the society and the assembly. Apart from now being a member of the Society of American Magicians, Brian is also a member of The Magic Circle ,   The In
Post a Comment
Read more
More posts

By Rolemagic - September 24, 2009
This year Brian Role` and Lola Palmer are preparing something extra special for their magical participation during Notte Bianca's now popular celebrations in Malta which is bound to leave audiences mystified, entertained and pleased with their performance. Their act 'Magic Of The Night' will be shown a number of times during the spectacular show 'Magic After Dark' to be put on by the Malta Magician's Society, IBM Ring 202 held at the City Theatre in Valletta on the 3rd of October 2009. Apart from the grand illusion and magical effects people coming to the theatre to come and see the shows held by magician members of the society will also have the opportunity to come and see a very special act brought in from Italy especially for the event. Hundreds of people are expected to come and view the show and everyone is already anticipating with great excitement this annual event. This is Brian Role` and Lola Palmer's third consecutive time that they will be pa
Read more 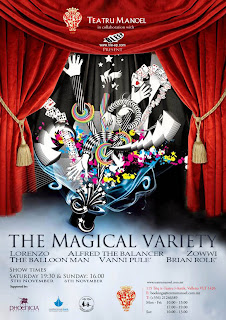 LAST FEW DAYS LEFT!!! DO NOT MISS THIS YEAR'S MOST MAGICAL SHOW IN MALTA! Teatru Manoel in collaboration with B.L.E.E.P. entertainment services , are proud to present 'The Magical Variety' on the 5th and 6th of November 2011 at Teatru Manoel. This second collaboration features a whole new exciting production starring Malta's top magicians, illusionists and variety act performers, all members of the Malta Magician's Society Ring 202, who will provide you with 90 mins of non stop magical variety entertainment ideal for members of all the family. Lorenzo, Alfred The Balancer, Zowwi, Robert The Balloon Man, Vanni Pule' and Brian Role' will entertain and amuse audiences of all ages with a variety of performances ranging from grand scale illusion, magic for both the young and the elder generations, mind reading, predictions, balancing skills and a creative colorful balloon show in one whole production aimed to entertain any person of any age. There are two s
Read more